It’s been about 8 months since we started using the two R.A.V.E.N. escape rooms called « Dusk of Ra ». These rooms were specifically designed for team-building events and have mostly been played by company employees.

We also opened private bookings for some time now and comparing both playing contexts has been very interesting.
While we promote our existing (and upcoming) escape rooms as entertainment, we actually focus more and more on building training an coaching opportunities around them.

In this post, I want to share some elements discovered while operating the rooms. Game-mastering « Dusk of Ra » requires much more interaction than traditional escape games as there are multiple layers of complexity.

We basically have 4 types of teams playing the game:

I noticed that usually friends and family fare better in the game than colleagues, and the main reasons are:

1. They know each other for a long time and easily split into smaller inter-operating teams.
2. They know what to expect and trust the other players.
3. Communication usually runs smoothly.
4. There is a form of competition; which smaller team will do better and how far will they go together?
5. Stress related to hierarchy is usually nonexistent (except in some rare cases).
6. They all go together to have some fun without the need to prove anything. They are there because they want to.

Basically, it’s very inclusive and I don’t think I ever had to witness a dysfunctional family playing the game – which could have been quite challenging to interact with.

I did, on the other hand, have dysfunctional teams journeying in our rooms and I believe they could upgrade this team-building experience into a real learning and coaching opportunity.

Colleagues usually fare less well in the game because they often lack what’s above. They don’t know there colleagues for long, hierarchy can be an issue, they don’t like each other, there’s a lot of internal politics, they don’t want to participate in a team-building activity, they feel they have to prove something, etc.

Dusk of Ra is an excellent way to actually challenge this and learn among others about Tuckman’s team-development theory. 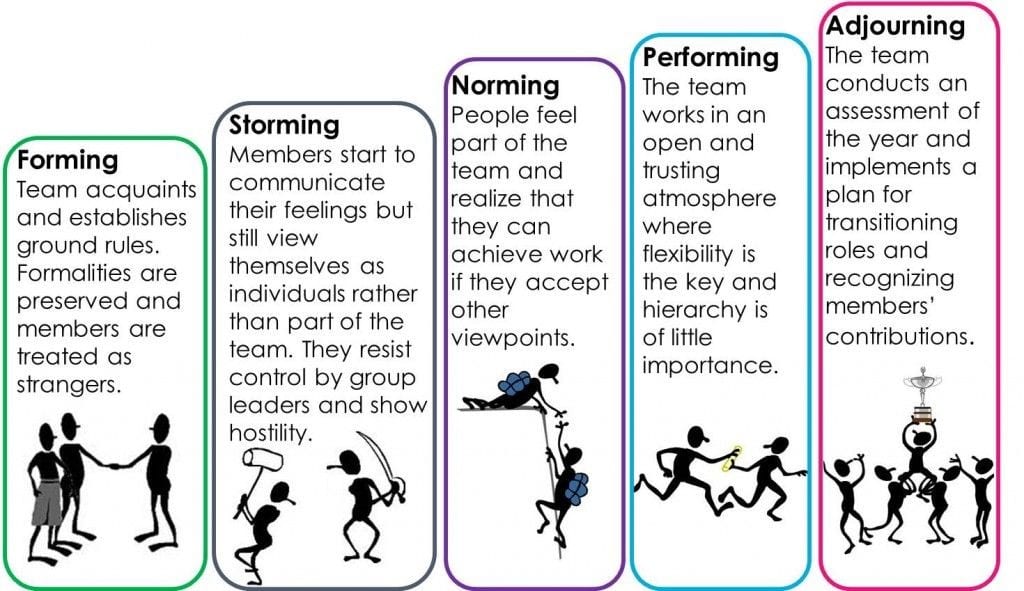 In most cases, colleagues playing together, whether they know each other well or not, tend to start within the forming level. They unconsciously take time to establish rules, hierarchy and play as a group of « not so trusting » individuals – trying together to solve the first puzzle. Very often, in larger groups, we also see teams lacking in leadership and have individuals doing their own thing exploring this new world by themselves. On the other hand, families and friends often start at the norming level, thus being more effective from the beginning of the game.

While there’s a lot to compare and learn from both groups, I will focus in this post on the next two groups.

We sometimes have families coming with children younger than 12. What I found out is that when the children are in minority, in most cases, they have a hard time adapting to their elders’ playing style and are often kept out of the loop. The adults play their game, between themselves, and rarely try to integrate the youngsters; or at least have a hard time in doing so. Rather than booking a babysitter or ask someone to keep their children, they bring them along thinking they will have fun together. This however is usually not the case and leads the adults to put members of their team aside. Members who should be considered as assets and not liabilities. Especially because kids think different (which we’ll see in the next point). The youngsters feel their morale ebbing and can get bored. They’re here to play, but they don’t actually do it. They have to follow the lead of others. Such a game session is all but inclusive and instead of working as a performing team, they tend to go back down to the storming level. This also sometimes happen with new employees. Instead of helping them integrate the team, they have to prove their worth. We can learn a lot about a company or team’s culture with such game sessions.

Lastly, we have teams with one adult and several children braving this mission. While I originally apprehended such teams, expecting them to fail or get quickly bored due to the complexity of the game, I was surprised to discover just the opposite. Children under the age of 12 (and some younger than 10) think out of the box and have less limitations. They are in an age where they learn a lot, play a lot and imagine a lot. Simply put, I’ve seen kids the age of 11 solve in minutes puzzles where adults start pulling their hair out. That is, if you let them do while channeling their actions.

Recently, a team of one adult and four kids made my day. They went far in the game, enjoyed it a lot and I saw them grow all along.
So, what made the difference?

First of all, the adult, an experienced supply chain manager, took the time to organise his team – he managed and lead his team during good moments and hardship. Even more than leading, he channeled the energies of all his team-members. He had an inclusive approach where everybody was equal – under him (which remind me of some famous CEO’s and some restaurant chefs on TV). He was indeed leading the team with a lot of zeal and was very expressive, shaking butts when needed and congratulated success with each puzzle solved. It’s actually the first team up till now where I saw one player really being the leader and acting as such.

The kids accepted his leadership role and trusted him for helping them move forward. They quickly grasped the concept of the game and managed to solve many of the puzzles. They worked well together and enjoyed doing so. They truly were in a state of flow and were performing.

I wouldn’t let a team only made of children play the game as it really does require adult supervision; that being said as I’ve experienced, inclusive leadership makes a difference.

While most adult teams tend to collaborate horizontally, we see once in a while players trying to go for a leading position. They take control of one of the important tools within the game, take much talking time or try to coordinate the rest of the workforce. Whereas, the role of coordinator is extremely valuable in the game, we often see it lacking.

As adults, we do not trust others the same way children do, and therefore do not let them (other adults) express their full potential. Whether it’s about leadership, communication between colleagues, delegation of tasks; we are biased with our professional and personal experience, generation and work context. As such, we may have lost a lot on this path and I wonder, I just wonder if having employees playing games (escape or other) with youngsters would bring some of this freshness, candor and innocence back.

What I can say is that virtual reality games somehow pull out the child in each of us, and that is one way we can have your team experience something different. And that, is for another blog post.